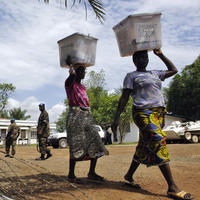 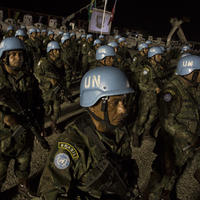 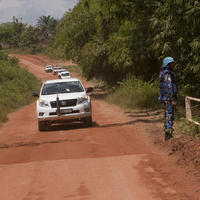 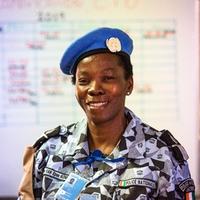 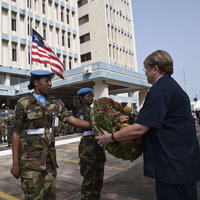 How does the withdrawal of United Nations peacekeepers (and associated resources) affect state capacity and the delivery of public services in formerly 'peacekept' states?

The After Exit research project is investigating conditions on the ground in countries that have played host to large-scale UN peacekeeping operations (UN PKOs), during the five years that follow mission closure. This research is greatly needed: whilst there is a rich understanding of the impact of ongoing UN PKOs, there is little known about the impact of withdrawal and trends in state capacity after exit. This creates a gap in terms of our assessment of UN peacekeeping; after all, if we are to understand the effects and efficacy of UN peacekeeping, then we need to consider how formerly 'peacekept' states fare after the pillars of UN peacekeeping support are taken down.

The project is highly timely:

Given the limited knowledge of post-exit conditions, the first academic aim of the project is to document the capacities and functions of formerly peacekept states, over the five years following PKO exit. To do this, the research team is undertaking a large-scale data collection effort, which includes:

The results of the large-N analyses, surveys, and associated qualitative work will be disseminated in leading academic and policy venues, and the survey data will be made publicly available so that other researchers may build on this work in years to come.

When the data collection work is complete, the second academic objective is to move beyond a mere description of trends and trajectories in formerly peacekept states by offering an explanation of the outcomes observed. Specifically, the project will aim to identify the conditions under which state capacities and the delivery of public services remain constant after exit, and the conditions under which the capacity of states to deliver services changes (either strengthens or weakens) after the withdrawal of UN PKOs.

What are the trajectories of state capacity shortly after the closure of peacekeeping missions and withdrawal of associated peacekeeping forces?

From a policy perspective, the primary aim of the project is to provide the UN and other international organisations involved in multidimensional peacekeeping with an understanding of the impact of peacekeeper withdrawal, so that best practice exit strategies can be identified and replicated. Although the UN has long recognised that there should be 'no exit without strategy' (UNSC, 2001), efforts to identify and implement effective withdrawal programmes have previously been hampered by a lack of systematic data on the impact of PKO exit. By generating such data, and sharing our findings with the UN and other stakeholders, we will contribute to efforts from the international community to ensure that peacekeeping deployments leave positive legacies.

Since responsibility for state functionality 'after exit' lies not only with the UN but also with governmental and state officials in formerly peacekept states, the second policy objective is to provide domestic authorities with insights that can shape the way in which they negotiate the diverse challenges associated with the end of UN PKO support. This objective will be realised by disseminating the findings of the project to authorities in states that are currently hosting UN PKOs.

The findings of After Exit are expected to generate significant interest among academic audiences, in addition to policy actors. The study will be of interest to scholars who are interested in: